The old station was the interchange for the 32km branch line from Tampin to Malacca town which was opened in 1905. The Japanese pulled up the rails during World War II for re-use on the infamous Death Railway in Burma (Myanmar). The line was never rebuilt after the War.

within  walking  distance  of  the  station

Tampin is a typical pleasant Malaysian town with friendly people and a few sights worth seeing. The town is overlooked by a range of hills including Gunung Tampin. It may have been the breeze off the hills but Tampin felt slightly cooler than nearby Rembau when I visited. Here are a few of the sights of Tampin. 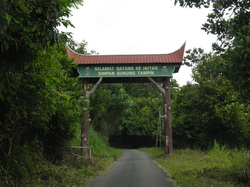 This hill is 764m high, making it the 255th highest mountain in Malaysia according to the list on my Malaysia Traveller site.

There is a road up to the top where some communications masts are located. The road is popular with hikers and joggers.

Access to the hill is via the Taman Bukit Tampin housing estate. 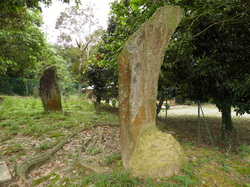 Just outside of town are some unusual upright stones called the Datuk Tua Megaliths.

They are said by the locals to be living stones which increase in size from one year to the next.

You can read more about these megaliths on my Thrifty Traveller blog.
Return from Tampin to Kajang to Tampin

Return from Tampin to Home
Next Stop: Malacca