After leaving Ipoh we continue to travel southwards through the beautiful scenery of Perak and down into northern Selangor.

The Federated Malay States Railway's Pamphlet of Information for Travellers from 1914 barely mentions this section of the journey. Only this brief description of Tapah Road is relevant:

Junction for Telok Anson (Lower Perak) and Tapah. Telok Anson is a coastwise port and the centre pf the large agricultural district of Lower Perak.Tapah is the centre of the tin mining and planting district of Batang Padang. Railway motor service runs from Tapah Road Station to Tapah, connecting with the trains.

What was this 'Railway motor service'?
This is what an article called Motor Services in the Malay States dated 21 July 1910 had to say, in the condescending and politically incorrect language of that era, about the railway motor service from Tapah Road which began in 1906.

The cars engaged upon this service consist of two 18 h.p. singledecked G.W.Ry.-type Milnes-Daimler omnibuses, with seating accommodation for 18 3rd-class passengers and five 1. class, three of whom are situated in a special compartment behind the driver and the other two beside him on the front seat. These cars run five double trips per day, in connection with the principal passenger trains, and are used either singly or both at once according to the traffic requirements.

It was no light task for those responsible to train native drivers in the handling of these vehicles, but patience and the early-discovered natural adaptability of the Malay native for this class of work have at last produced drivers, who, if not skilled mechanics are capable of handling their cars skilfully, whose coolness and intrepidity are unquestioned, and whose cleanliness of appearance, for natives, is exceptional.

You can read more about the Railway Motor Service and see a video of the vintage vehicles used by clicking here. 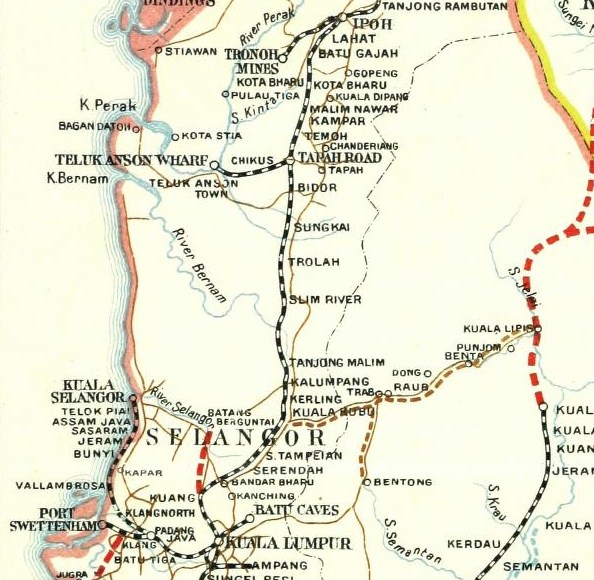 Note that the modern day stations of Rawang, Sungai Buloh and Kepong did not exist when this old 1914 rail map was made. The branch line from Tapah Road to Teluk Anson Wharf (now Teluk Intan) was closed down in 1991.
(There are a few remnants of the old Teluk Intan railway still surviving. Read about them here.)
These are the towns that we pass through (click on the heading or image to link to the respective page):
Next Stop: Kuala Lumpur Station
Return from Batu Gajah to Kepong Sentral to Home