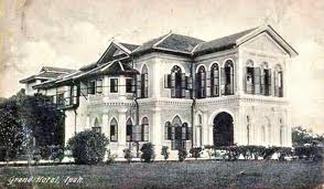 The Grand Hotel was the place to stay in Ipoh when the 1914 Pamphlet of Information for Travellers was written.

This 40 room hotel was opened on 16th December 1909 to much acclaim from the press and public. It was located on Lahat Road, a few minutes walk or rikisha ride from Ipoh railway station, in a building leased from the family of the late Dato Panglima Kinta Wahab.

Prior to the opening of the Grand, railway travellers would have had to stay at the Government resthouse on Station Road (the Station Hotel above Ipoh's famous railway station was not opened until 1914) or one of the Chinese owned hotels in town. 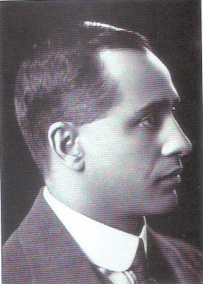 The Grand Hotel was run by Mr. Pierre Z. Creet, an Armenian businessman who gained his hotel experience at the famous Raffles Hotel in Singapore which was owned by the Sarkies brothers with whom Creet was closely associated and possible related.

For a time, Pierre was assisted by two of his brothers, Makertich and Simon Creet.

Malcolm Gasper (Gasparian), a fellow Armenian from Raffles, helped run the Grand during 1913.

Pierre Creet was born in Julfa, the Armenian district of Isfahan, Iran on 16th January 1881.

He was described as " a handsome, cultured man with a keen sartorial sense".
Pierre Z. Creet.
Photo from Respected Citizens by Nadia H. Wright.
The Grand was a luxurious hotel with a planters' and miners' lounge, smoking rooms and a large garage for the new fangled motor cars which were becoming commonplace among the wealthy classes in Ipoh. 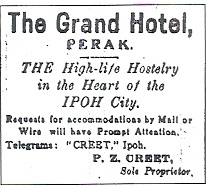 Advert from the Pinang Gazette, 3rd May 1912.
From Respected Citizens by Nadia H Wright.
Despite the experienced management team and Ipoh's need for a quality hotel, the Grand was not successful financially for a number or reasons. The district's planters and miners were used to buying drinks on credit by signing a chit and when Pierre stopped the chit system (presumably to ease his cash flow and prevent bad debts) a number of disgruntled regulars switched to the Ipoh Club where they could just sign for their gin pahits.

In addition, the opening of the new station hotel in 1914, together with the economic downturn caused by the First World War, meant that the Grand's glittering existence was shortlived and it closed down in June 1918. 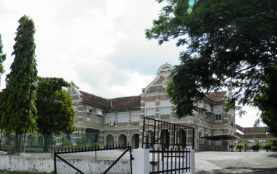 Anglo-Chinese School, Lahat Road
The hotel became the Methodist Girl's School for a while before rebirth as the Majestic Hotel under new management. By the 1930s the hotel had once again regained its position as the hub of Ipoh's social life but then the Japanese invasion during WWII finished it off for good. The building is no more and the sprawling campus of the Anglo--Chinese school occupies its site. 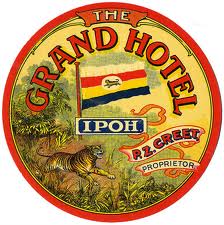 Respected Citizens
The History of Armenians in Singapore and Malaysia

by
Khoo Salma Nasution and Abdur-Razzaq Lubis
Ipoh World is a great website with stacks of fascinating information and photos on Ipoh and the state of Perak.
Return to Ipoh Then & Now