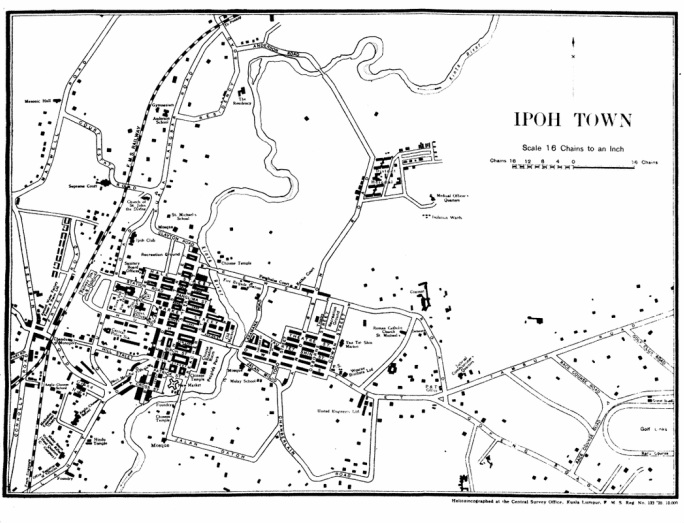 P.A. Anthony, the General Manager of Federated Malay States Railway (and presumably the author of the 1914 version of the Pamphlet of Information for Travellers), appears to have been quite impressed by Ipoh and writes about the town in favourable terms as he describes a rikisha trip around the major sights:

"Taking the railway station as a centre, Ipoh, the commercial capital of Perak, may be thus described. The resthouse lies on the station road, which runs straight into the town down a hill. 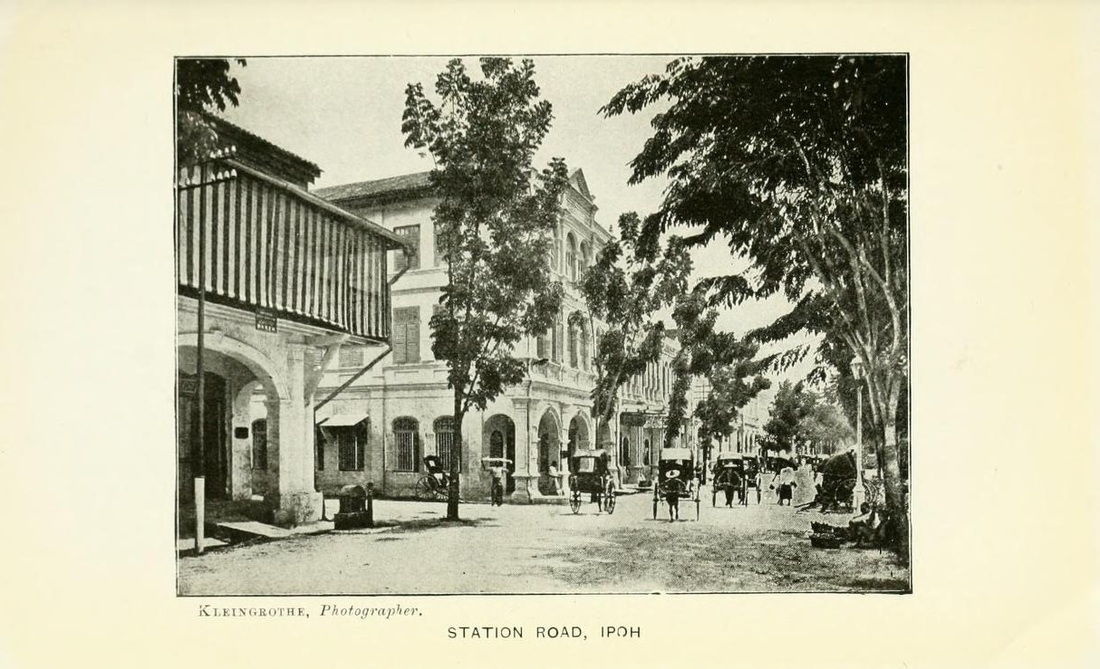 The famous Ipoh Railway station which exists today was nearing completion when the pamphlet was written. Up until 1914, the railway station had been just a single storey wood and atap building with no accommodation attached.

"The first turning on the left leads to the Kuala Kangsar Road (Club, Courts of Justice, English Church, Residency), and the first turning on the right is the Batu Gajah road (hospital grounds and Grand Hotel). If we take neither turning but go down the hill, we pass on the right the Government offices and Post Office, and on the left the Padang (recreation ground), the municipal offices, the banks, and, over against them, on the right again, the Birch Memorial Clock Tower, recently erected to the memory of James Wheeler Woodford Birch, first British Resident of Perak, who was assassinated by Malays. 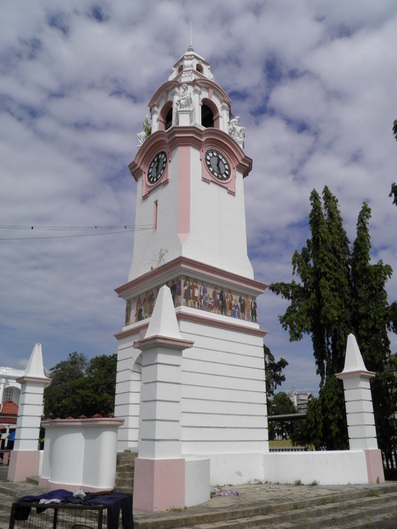 "Continuing past this along Hugh Low Street, named after the second British Resident, we go right through to the bridge over the Kinta river, passing on the right, the pretty People's Park, with its decorative Chinese temple on  the edge, and noting the Malay mosque opposite across the river. 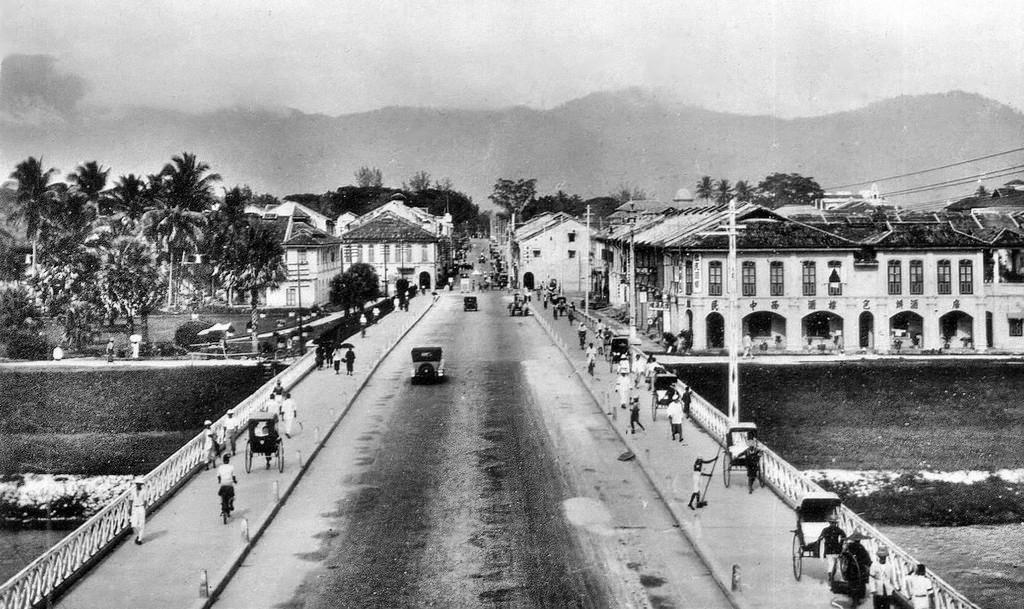 Hugh Low Street is now called Jalan Sultan Iskandar. This was how the street looked in 1930. By this time, rikishas were using the pavement together with cyclists and pedestrians. Incidentally, Low's Peak, the highest point on Mt. Kinabalu, is also named after Hugh Low. 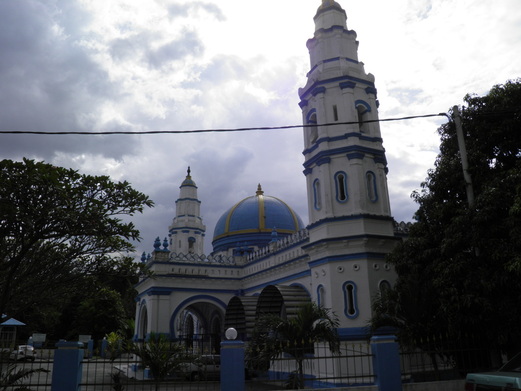 Dato' Panglima Kinta Mosque is the mosque referred to in the pamphlet.

"Crossing the bridge we continue through the new town, and when the shop-houses end we swing to the left down a side street (this street was probably Cowan Street, now Jalan Raja Ekram) and keep straight on at right angles to our previous course until we reach a main road running parallel to Hugh Low Street (Brewster Road, now Jalan Sultan Idris Shah). Here we turn left-handed and again cross the Kinta river, this time by the Birch bridge, named after the murdered Resident's son, Sir E.W. Birch, who, thirty years after that crime, in turn became Resident of Perak.

"From this bridge we run straight to the recreation ground, and, bearing to the right to go round it, pass the Indian Muhammadan mosque, climb the rise to the English Church, turn left-handed again, pass the Club and so arrive back at the railway station. This round in a rikisha (25 cents, 7d.) will give a very good idea of Ipoh and enable the visitor to realise that it is by no means necessary that an Eastern town should be a crazy congeries of filthy and dilapidated rookeries as so many are. "

A pleasant evening's run, also in a rikisha, is along Hugh Low Street, across the bridge and on until the road forks. Take the left hand fork and go on as far as the turn to the racecourse, turn down this, past the Golf Club, and so bearing left-handed come back on the same road, but before reaching the fork branch off to the right and re-enter Ipoh by way of Birch bridge and the Padang. The view from the racecourse towards the limestone cliffs and the higher hills of the main range behind them is at all times beautiful, but perhaps most impressive when a distant evening thunderstorm majestically proceeds along them, its black-blue lowering above the white-splashed rocks, and its whole scheme of colour shot through and through with those violet vapours into which darkness at length melts the dying light of the day.

From this description and from the map at the top of the page, it appears that the golf links used to be inside the oval racetrack. Nowadays the racecourse is still in the same location, but the golf club, now the Royal Perak Golf Club, has shifted to a much bigger and more prestigious location about 1km away.

Return from Ipoh Then & Now to Home