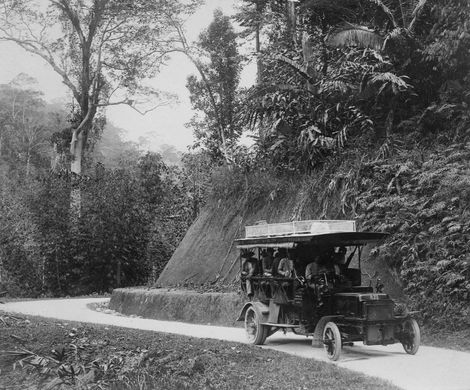 30 / 40 h.p. Straker-Squire no. R 25 on the Pahang trunk road
In 1914, when the Federated Malay States Railways Pamphlet of Information for Travellers was written, FMS Railways ran a Motor Service linking various railway stations on the network with outlying settlements.


While the railway was helping the Colonial administration to open up the virgin jungles of Malaya for agriculture, mining and development, the rail network only served narrow corridors on the peninsula and roads were needed to extend prosperity to a wider area.

The longest routes, commencing in 1907, and covering the most challenging terrain, were from Kuala Kubu Station to Raub, then onwards from Raub to Kuala Lipis, and another route from Raub to Bentong.


The vehicles (lorries and buses) carried mail, passengers and goods and were manufactured by the following makers:


You can find much more detail and excellent photos on Uncle Howard's Album, a fascinating website put together by Tim Light based on an old photo album purchased by Richard Peskett at a sale.

With the kind permission of Tim and Richard, I have created a short video from the photos on the website. If you have any information on Uncle Howard, I am sure they would appreciate you getting in touch (email address on Tim's website).
Return from FMS Railways Motor Service to Kuala Lumpur