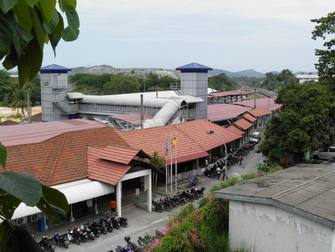 Rawang Railway Station is the northern terminus of the  KTM Komuter service originating in Sungai Gadut (south of Seremban) and passing though central Kuala Lumpur before arriving at Rawang.

It is also a station on the ETS line from KL to Ipoh and on the main North South Intercity route.

As such it is a fairly busy station as can be seen from the large number of motorcycles parked outside by city commuters.

within  walking  distance   of  the  station

In my opinion, Rawang is a rather characterless town. Or perhaps I am being unfair. Maybe its charms are well hidden! When the 1914 Pamphlet of Information for Travellers was written there was no station at Rawang. It was once a tin mining area and in 1871 a battle took place here when Chung Piang, the right hand man of Kapitan Yap Ah Loy, fought and won to protect the Kapitan's tin mines from rival interests. Rawang has now grown into a sprawling dormitory town for Greater KL with a population of over 120,000. There is a giant cement factory on the outskirts of Rawang adding to the rather gloomy image of the place.

The railway station is close to the undistinguished traffic-clogged town centre. I could not find a great deal of interest within walking distance of the station. These are the highlights:

The main attractions near Rawang are Kanching Rainforest Waterfall and Templer Park. You can read about these on my Malaysia Traveller website and Thrifty Traveller blog by clicking on the respective links above.


There are plenty of taxis available at Rawang Railway Station if you want to visit these nearby places.


Return from Rawang to Batu Gajah to Kepong Sentral

Return from Rawang to Home
Next Stop: Sungai Buloh