The Penang Hill funicular railway was not operating when the Federated Malay States Railway Pamphlet of Information for Travellers was published in 1914 so it is not mentioned in the pamphlet.

There had been an earlier attempt to build a funicular railway to the summit of Penang Hill with construction commencing in 1897 and completed in 1906. However the design was faulty and the project went bankrupt and was abandoned.

In 1914 the only way up the hill was by walking, or by pony, or, more commonly, by sedan chair. 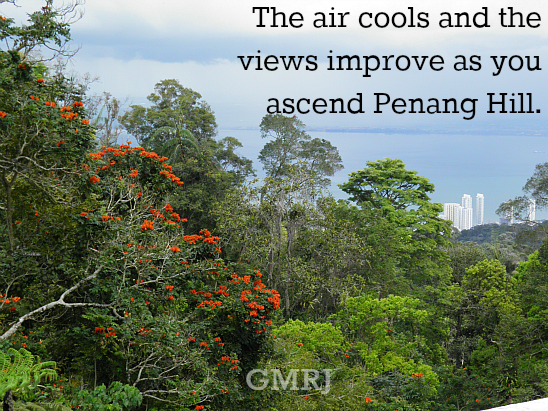 This is what the pamphlet has to say about Penang Hill: 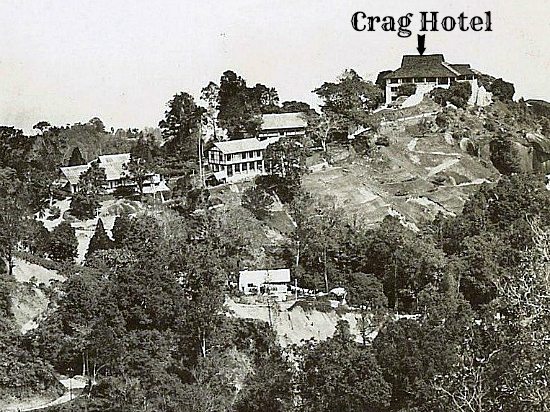 Built as a bungalow in 1890 and converted into a hotel in 1895, the Crag Hotel gained fame as one of a chain of hotels, including the E & O in George Town, the Raffles in Singapore and the Strand in Rangoon, owned by the Armenian Sarkies Brothers. The Crag Hotel was very popular before the Second World War after which it remained empty for ten years. From 1955 the site housed Uplands School run by the Incorporated Society of Planters which leased the property from the State until 1977. Since then the site has been under the care of the State Public Works Department. It was used as a location for the 1992 Academy Award winning French film 'Indochine'.

So says a sign on Penang Hill erected with the assistance of Penang Heritage Trust.
It was announced in 2011 that the Aman Resorts group is to restore and manage the Crag Hotel but it appears that renovation work has not yet commenced.

The funicular railway is completed 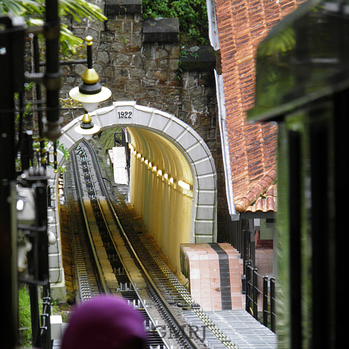 After WWI, interest in building a funicular railway was revived to service the growing number of residences being built there to escape the heat of the city below, with work beginning in 1920. The railway was opened in 1923.

The journey had two be completed in two independent sections to accommodate the changing gradient of the track. Passengers had to change trains half way up (and down).

The tram has gone through a number of refurbishments and changes of rolling stock in its long history. Since the latest modernisation in 2011 it is no longer necessary to change trains half way and the whole journey is completed in just 10 minutes.

The funicular railway departs from the Ayer Itam area of town.

It is still possible to walk up Penang Hill if you prefer. I hiked up the jeep track with my family and the walk took 2 1/2hours. You can read about it on my Malaysia Traveller website. Obviously we are not as fit as those sedan chair porters of old who could do the trip in just one hour with a heavy load!