When the 1914 Pamphlet of Information for Travellers published by Federated Malay States Railways was written there was no causeway between Johore Bahru and Singapore and railway passengers would cross the Johore Strait at night by ferry and re-board the train for the final stretch of the journey through the interior of the island of Singapore.

"The principal station, Tank Road is somewhat inconveniently situated at present too far from the centre of town, but one may reckon on reaching a hotel with the baggage a little after nine, in time for bath and breakfast.

It is advisable to telegraph from Kuala Lumpur for rooms, in which case the hotel runner will meet the train and take baggage. But in any case the gharis and rikishas will take you to the centre of Singapore without direction."

How civilised it was to travel in those days! 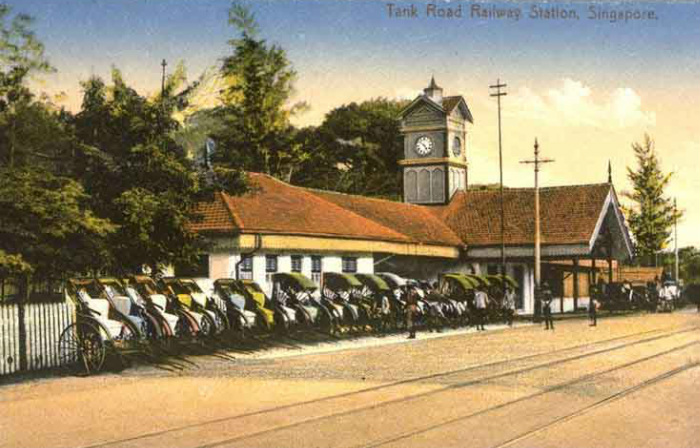 Tank Road station with a line of rikishas waiting to whisk passengers to their hotels.
The pamphlet provides a good deal of historical background on Singapore. Here are a few excerpts.
The guide quotes Sir Stamford Raffles speaking about Singapore:
Pirates infested these waters in the early days of Singapore, a problem which even today still exists in the region. The pamphlet describes it well:

"Piracy was in those days the only career for a Malay of spirit, and it offered all the glorious uncertainties of war, of sport and of commerce.

It was no uncommon thing in those days for ships and junks to sail to or from Singapore and no man see them more. Attacked off some river mouth trading settlement by Malay prahus, rowing thirty a side, often cunningly disguised as fishing boats, or else when becalmed at sea and openly set upon by native craft whose lightness took advantage of the failing breeze, the smaller Chinese, Indian and English trading craft ran risks which today seem almost incredible.

When overpowered, their crews were either massacred or carried away into slavery, or merely turned adrift, the ships gutted of every article of value and themselves plundered of provision, of water and even clothing, to die of privation or to make if they could some not inhospitable harbour. The British did what they could to suppress piracy, but until the invention of steam vessels no real suppression was possible." 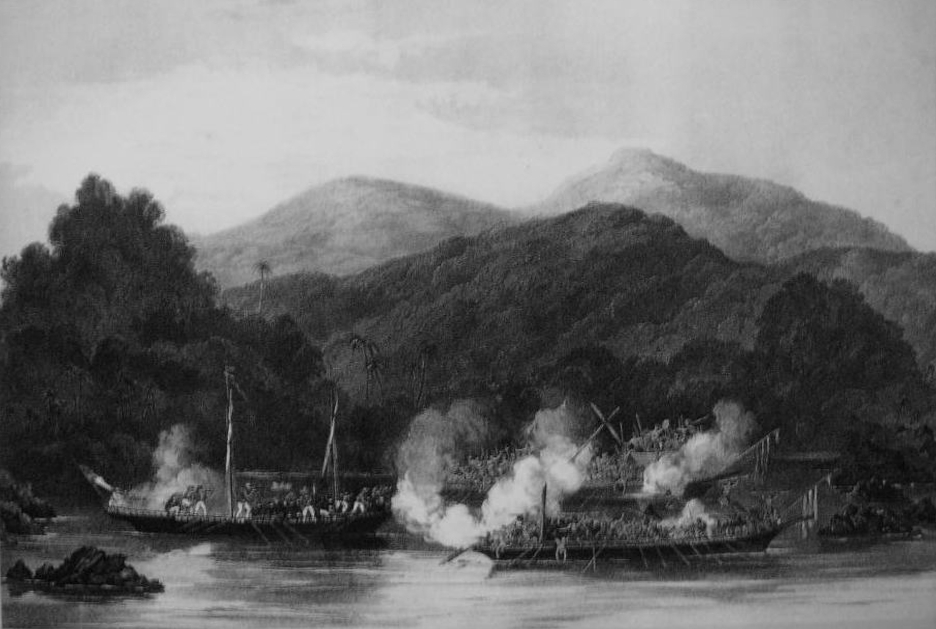 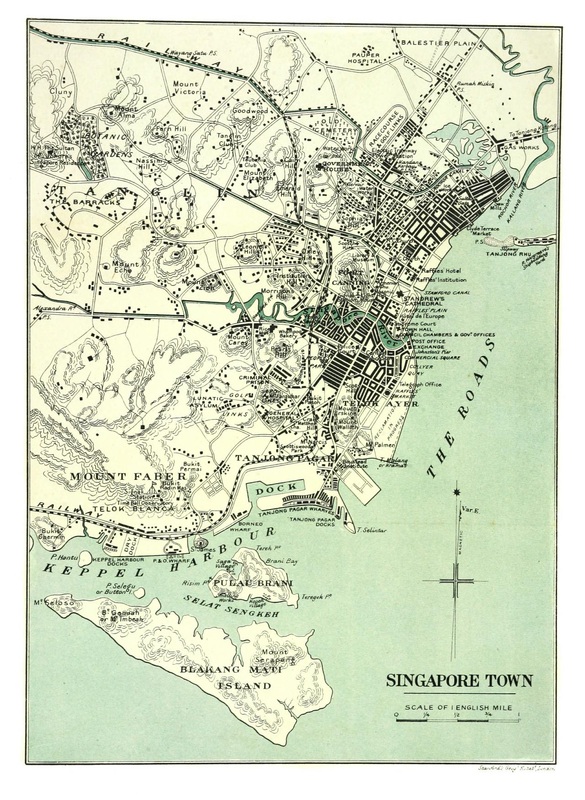 Map of Singapore Town in 1914.  Sentosa was called Blakang Mati Island in those days.
The pamphlet describes the landmarks visible from steamers entering Singapore from the west including Blakang Mati Island (now better known as Sentosa Island), Fort Pasir Panjang, Mount Palmer and Keppel Harbour, named after Admiral Keppel who discovered this deep water anchorage.
Reaching the built-up area of the town, the guide continues:

"We pass a large market on our way. Markets in a strange land are always interesting and it is perhaps worth while to stop and walk through. Beyond this, if we keep to the sea front, we come to Collyer Quay, where all the principal mercantile houses are situated.To the left of Collyer Quay we come to Raffles Place, where is the business heart of the European side of Singapore life. Here are all the principal shops, the banks, the shipping offices, and close by, on the sea, is Johnston's pier. The building opposite this is the Hongkong and Shanghai Bank, and opposite it is the Chamber of Commerce building, in which is the Singapore Club. Next to this comes the Post Office."

"There are two bridges over the Singapore River, one, suspension and inadequately broad, called Cavenagh Bridge, upstream, and the other, over which the trams run, downstream, called the Anderson Bridge." 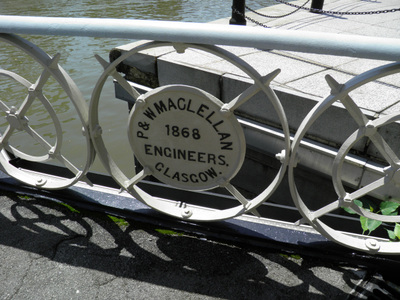 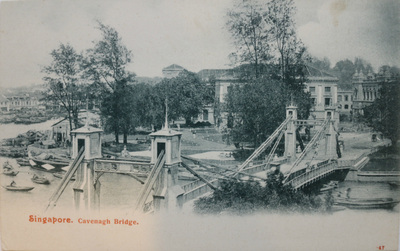 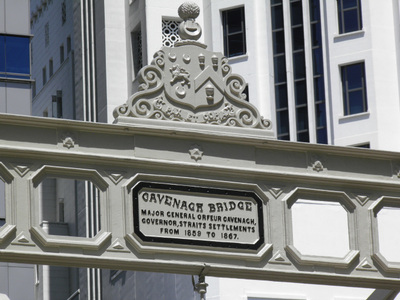 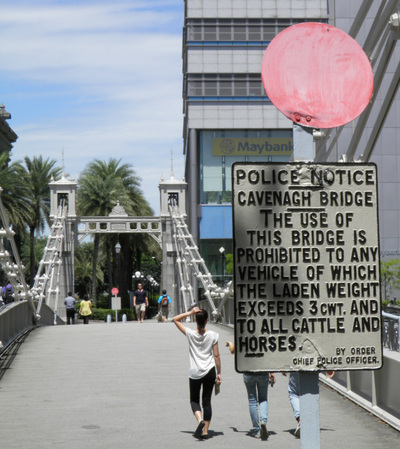 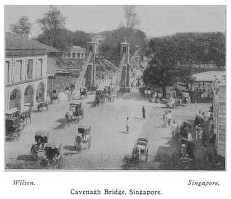 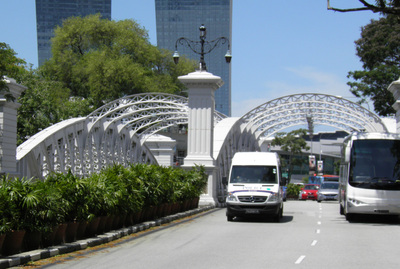 "Crossing either bridge we see on the left, close to the river, the Government offices (now Asian Civilisation Museum).

At the north-west end of the Padang stands the Hotel de l'Europe." 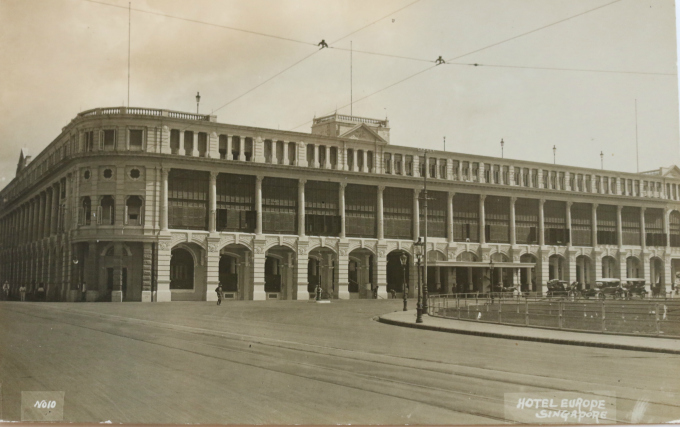 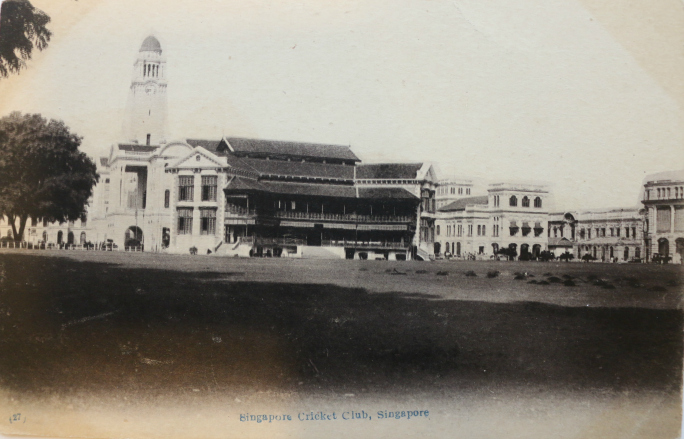 "Beach Road crosses the canal and runs past Raffles Hotel.

Parallel to Beach Road, in which are the brass shops (origin of Bras Basah name?) runs North Bridge Road.

Of the streets between the two the most interesting is Rochore Road, for here are the bird and animal shops. Amongst the birds are innumerable doves in cages, whose value is according to the sound of their coo. Ten dollars (£1 3s 4d) is not too high a price for a really good bird according to Malay fanciers. Here is a list of birds and beasts you shall see in Rochore Road, if you do not mind smells - Java sparrows, grey with pink beaks, monkeys, white rabbits, fowls with feathers growing reversed, porcupines, tiger cats, bears, cassowaries, pigeons, purple gallinules, cockatoos, two gibbons, black and silver, sitting folded in each other's arms, most fascinating of all monkeys, snakes, guinea pigs, parrots green, parrots red, parrots blue, purple parrots, parakeets, little tiny birds in sapphire blue, old gold and crimson, deer, golden pheasants, hornbills, the slow loris, civet cats, squirrels, all of them shrieking or twittering or cooing and apparently very pleased with themselves in spite of close quarters." 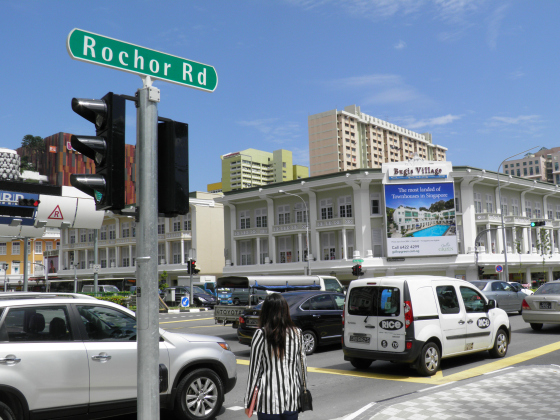 Today's Rochor Road is far less exotic with no sign of shops selling endangered wildlife.
Return from Singapore to Home
Most of the images on this page are photos taken by the author or vintage postcards from the author's own collection. The Woodlands and Tank Road images are taken from an interesting website by a true railway enthusiast.